Being comfortable using one's voice is essential for effective verbal communication. For many transgender people, however, one's voice can be the source of great anxiety, depression, and dysphoria. This can result in avoiding social situations, not voicing valuable opinions at their jobs, and anxiety around many activities of daily life. For those whose voice decreases their quality of life, transgender vocal training is a safe, vocally hygienic option for exploring what their voice is capable of to make their voice more functional for them!

An Important Note:
The ultimate goal of trans vocal training is to improve a client's quality of life by improving their relationship with their voice and explore their voice's capabilities. Goals set and methodology used will vary from client to client based on where a client is coming from, what their voice is capable of, and where they want to go with their voice. It is much more important that you are happy with your voice than meeting such cisnormative standards as gender norms. This page is an overview of just some of the guidelines and methods used.

The domains of voice and communication targeted in this work are largely customizable based on what the client wants to target. The only mandatory domain is vocal hygiene.

A speech-language pathologist must make sure that your voice is being produced with the least amount of tension or other complicating factors. This includes making sure a client is drinking enough water, not engaging in excess shouting, managing acid reflux, and addressing any other factors which need addressing. Please read our page on vocal hygiene if you want to know more, or download our free informational handout! 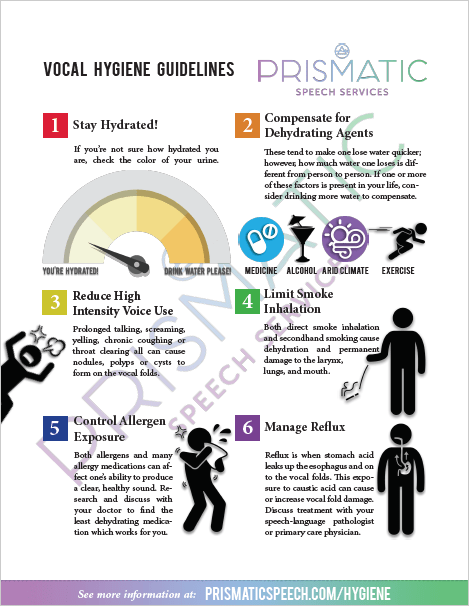 Depending on what the client desires and data gathered during the assessment, trans vocal training clients can target the following: 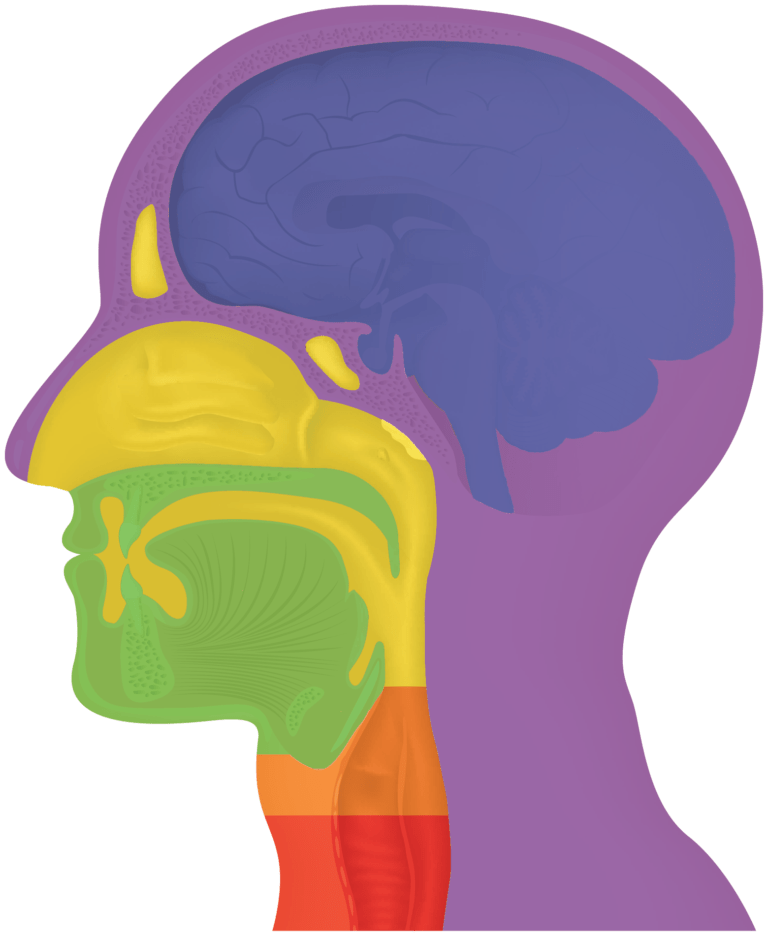 How high or how low one's voice is on average.

How volume and pitch change during a sentence to show emphasis and emotion.

How the sound one produces is changed by the size and shape of one's mouth.

Length, intensity, and shape of vowels and consonants.

Pitch refers to how high or low a sound is produced, as measured by the number of times the thing producing the sound vibrates in a second. This unit of measure is called Hertz (Hz). Typical human speech is produced by vibrating the vocal folds, which are located in our larynx. We are able to change the pitch we produce by increasing or decreasing the tension in our vocal folds and surrounding tissue.

Read more about the mechanics of how we produce voice.

According to a study done in 2010, the average listener will gender voices they hear as belonging to a woman if they have an average fundamental frequency, or pitch, of 160 Hz or higher; the opposite is true for perceiving a voice as masculine (McCready, Campbell, Crutchley, & Edwards, 2010). Using these observations as a foundation, we can structure our own framework which is non-binary inclusive and allows for more natural variety:

Masculine-perceived voices tend to fall in the 85-175 Hz range; androgynous-perceived voices range from 123-247 Hz; and feminine-perceived voices typically are between 147-294 Hz. Having a voice that falls outside these norms does not mean one has a voice that isn't masculine, feminine, or androgynous; these are merely how the average ear interprets gender based on pitch. A voice that averages at 240 Hz can still be masculine, and a voice at 90 Hz can still be feminine, and neither of these voices need to be changed, especially if the user of that voice is happy with their presentation. There are women with deep voices, there are men with high voices, and there are non-binary people who have voices that aren't androgynous. These people's identities are absolutely valid and they should not be silenced or disregarded due to their vocal qualities.

-Grab a rubber band; stretch it out a couple inches and pluck it. Stretch it an inch or two further and pluck it again. The increased tension in the rubber band should result in a higher pitch. This is the same way vocal cords work: by stretching out and tensing the vocal cords, a higher note is produced; by relaxing and shortening them, lower notes can be accessed.

-Want to play with your voice's pitch? Use a website or app with a tuner and voice into your phone or computer's microphone! If your voice feels like it's getting tired, take a break before continuing to explore your voice.

Intonation is how one's pitch and volume change along a phrase or sentence to convey emphasis, emotional state, and much more. Everyone has unique patterns to their intonation that conveys who they are.

Enquire Into Your Intonation

Want to explore your own intonation patterns? Say these phrases:

"What a great idea."
"You wish to know all about my grandfather?"
"It's easy to tell the depth of a well."
"How would you like to go to the mall today?"

Resonance refers to how the sound produced by your larynx is shaped and changed as they travel through your mouth and nose, or oral and nasal cavities. Different sizes and shapes of cavities can greatly affect the timbre (TAM-burr), or texture, of the sound produced. The larger the cavity, the darker and richer the sound produced; the smaller cavity, the brighter and thinner the sound. Versatile singers and voice actors can change the shape of their vocal tract to produce different vocal qualities and singing styles (see below); the same can be done for the speaking voice to adjust the speakers' timbre.

The Resonance of Vowels

Whether or not you know it, you change your resonance all the time throughout the day as you produce voice! Different vowel sounds are achieved by moving one's tongue, jaw, and lips. As these move to different positions for different sounds, different mouth shapes, and thus different resonance patterns, are produced. For this exercise, we're going to be experimenting with the 'eee' vowel (as in "email") and 'ahh' vowel (as in "box").
-Say the 'eee' sound several times in a row, letting your tongue relax in between each production. What does your tongue do to produce this vowel?
-Repeat the exercise with the 'ahh' vowel. What does your tongue do differently for this sound?
Chances are, for the 'eee' vowel, your tongue moved up and forward in your mouth. This reduces the size of the oral cavity, resulting in a bright, thin, forward resonance. Inversely, the 'ahh' vowel is produced by lowering the tongue and moving it back, increasing the size of the oral cavity and producing a dark, rich resonance.
Every vowel has a unique resonance pattern- this is how one can hear the difference between them (Raphael, Borden, & Harris, 2007).

Speaking in broad generalizations, female-assigned-at-birth people have smaller heads on average. This means that the oral cavity, too, is smaller, resulting in an overall brighter, thinner sound. The inverse is true for male-assigned-at-birth people– larger heads mean a larger oral resonance chamber and a darker, richer overall sound (Adler, Hirsch, & Mordaunt, 2012).
Combining this with our knowledge of vowel resonance patterns, we can adjust clients' tongue positioning across all sounds to either make their resonance darker and richer (by moving closer to the 'ahh' sound) or thinner and brighter (closer to the 'eee' sound), depending on that clients' preferences.

When we discuss articulation in English, we are referring to the production of consonants (pressurized sounds created by significantly obstructing the vocal tract) and vowels (sounds which are produced relatively free from obstruction) (Glenn & Glenn, 1998, p. 125). We've discussed vowels at length in the resonance and intonation sections, so this section will largely focus on consonants. As with articulation

Say the following sentences, and pay close attention to how you produce the target sound for each sentence:
/p/: Perry placed popcorn in the proper pot.
/t/: Take time to tell Terry the truth.
/k/: Carry cartons of carrots to Karen.

How do you produce these sounds? Generally speaking, the /p/ sound is produced by closing the lips enough to build pressure, then letting the tension go to produce a puff of air at the lips. The sounds /k/ and /t/ are made in a similar way; the tongue closes off the airway at different points (the roof of the mouth for /t/, the back of the mouth for /k/) to build pressure, then returns to resting position as the sound is carried forth on the breath.

To increase the dark tones of the voice, we can increase the pressure and produce the consonants further back in the mouth.

For a lighter sound, we can decrease the pressure, increase airflow, and produce the consonant towards the front of the mouth.

I'm early on in my transition; should I seek trans vocal training?

Where you are in your transition should not prevent you from seeking services you believe will improve your quality of life. Clients from all stages of transition, including not transitioning, seek trans vocal training. If you are very early on in exploring your identity or are unsure if trans vocal training, you are highly encouraged to book a free 30-minute consultation so we can discuss your specific voice and our speech-language pathologist can answer any questions you have.

Absolutely! People of all genders are welcome to take trans vocal training.